Slept for 3 hours and tried to get up and start driving again but it wasn't happening so I stopped and slept for another 2 hours. This means I would be late but I was already behind schedule so what's another few hours.

Tried making some of that time by speeding some more. My Waze works pretty good by other users reporting when they see cops so you know when they are coming. Well not this time as I cruised into MN as there was an officer hiding over a hill and got me doing 75mph in an 65mph zone. Oops.

When the cop came up, he asked if I knew the speed limit and I said maybe 70 as I was coming from LA and wasn't sure. He said only 65 and went back to his car. When he came back he said he just gave me a warning and told me slow down. I thought for sure he was gonna give me a ticket so I was a very happy boy.

You can see the cop car in my mirror. 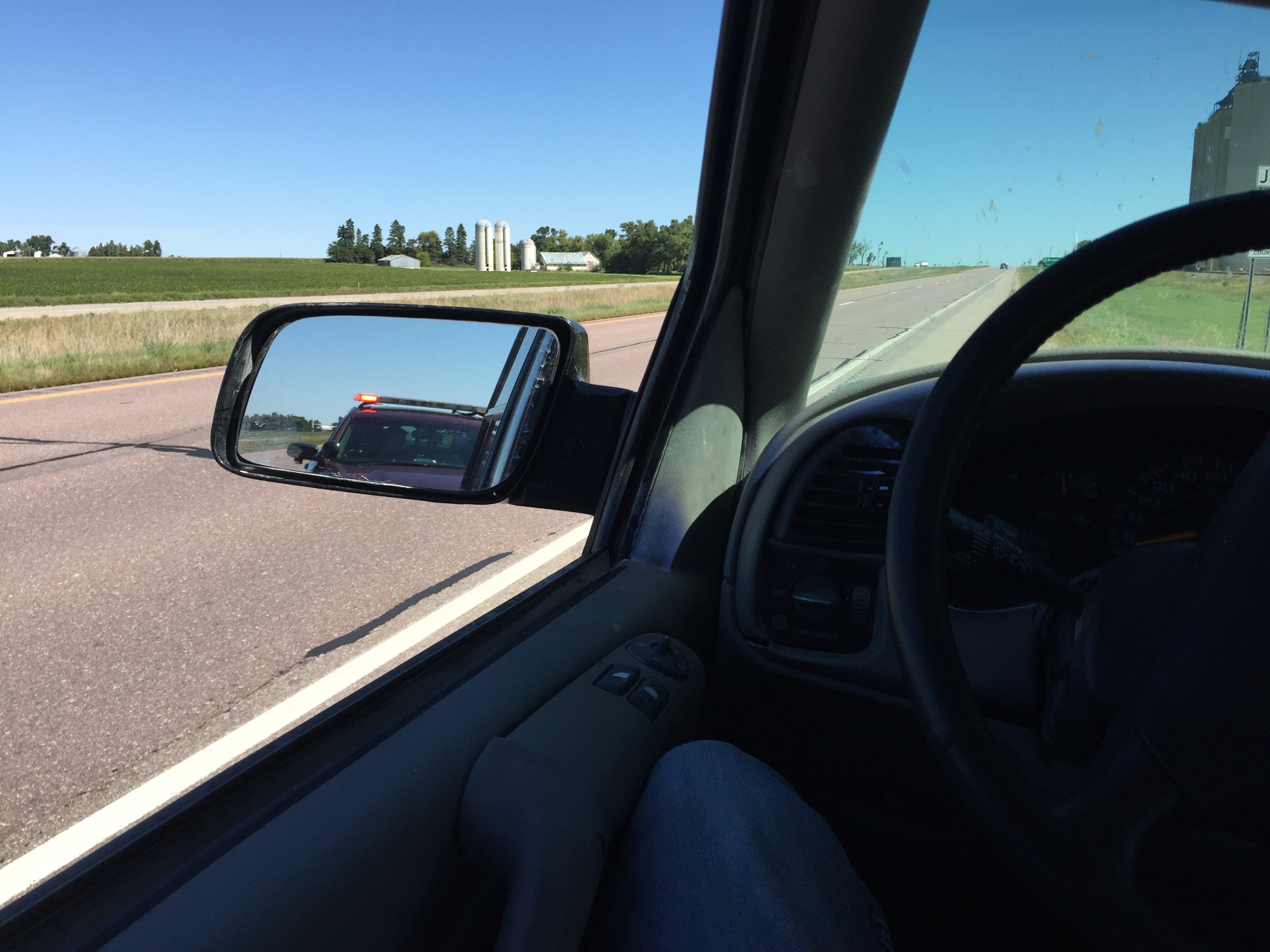 Made it to Minneapolis and sure enough hit some traffic yet again. This road trip has just been one delay after another. Had to stop by REI to buy a few last minute things like hiking poles and when I went to check out, one of the guys said "Aren't you supposed to be hiking with Andy on the SHT right now?" Looked up and saw it was one of Andy's friends. Ha.

Hit some more traffic but eventually made it to my sister’s house. Only took 46 hours of driving and I still had 6 to go. Wowzers.

Had to pick up a few things I bought online and had delivered here including my rain cover for my backpack. It was nice seeing my sister, her husband and my nephew. MacGyver was so happy to be out of the van. He was running and rolling in the grass everywhere. He also went swimming in their lake.

I took a quick shower and unloaded a few things from my van as I didn't want to leave any expensive things in my van while it was parked for a few weeks at the trailhead. Said bye and I was off to meet Andy at the trailhead in Duluth.

He was there waiting for me when I arrived. It was already 7pm and we were waaaaaay behind schedule so he put his stuff in my van and we set off. Tried swinging by a liquor store but they were closed. Stopped by a grocery store for some last minute items and ate at Culvers. 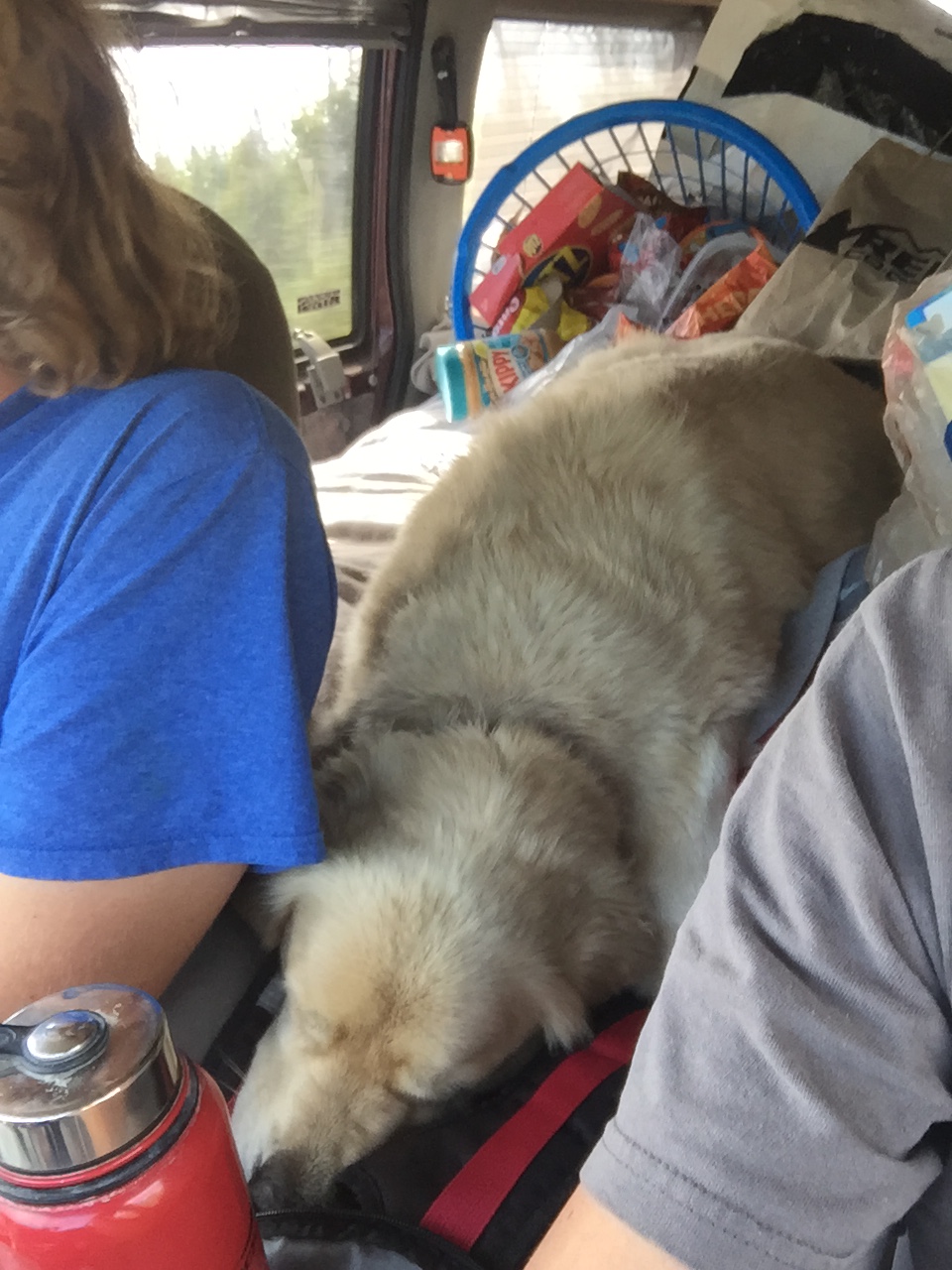 Next came the challenging food drop. We had decided not to mail out food resupplies to post offices along the way. Instead we would go to trailheads and hang our food every 5 days or so.

Found our first spot and it was dark. Walked up the trail and down the trail but couldn't find a branch to hang it. We started walking the road and still nothing. Eventually after like 45 minutes we found something that might work.

It took a while to throw the rope up and over the branch but Andy finally got it. Tied our bags to the twine and started pulling it up. Snap! The twine broke. Fuck!

We were both starting to get annoyed and frustrated by this point as we had been trying for an hour in a half with no luck. We decided to try and use different rope and a different technique. Ended up getting it up by using 3 trees. Have no idea if it will still be there in 3 weeks...

So…2 hours later we were back on the road heading to another trailhead where we will do an alcohol drop and spend the night. We had planned to hike one mile in to a campground but it was 1am and so decided to camp in the parking lot. We hung out for an hour drinking beers and catching up.